I have tried my hand a few times in the last year at baking bread. I have mostly done partially whole wheat bread, I think I have only done white bread once. I am not sure why I haven't made fully whole wheat bread yet, but I haven't run across too many recipes for 100% whole wheat bread. After trying a few recipes and not loving any of them, I put a request out on Facebook for anyone who was willing to share a good tried and true whole wheat bread recipe. My cousin Lori said she would send me her recipe which was her mother-in-law's (my aunt Judy's recipe), which they had rewritten to make two loaves of bread (I think the original made 6 loaves).

I am pleased to say that I have really been enjoying baking bread. Even with my couple of flops (undercooked loaves my first attempt, then a couple of batches of burned buns....), I am enjoying it. I love to mix it up then put it somewhere and check back on it and find that it has risen well. I think punching the dough down is fun and watching it deflate. I like forming loaves of bread and baking them until they are beautiful golden brown with a light crispy crust. Yum!

I am going to share the recipe, and some ideas for possibly changing it up in the future. The recipe came to me with a list of ingredients and a temperature and time for baking, but no directions of how to assemble it. I took my previous experiences and was able to make some pretty looking bread, and I have to say it tastes good too!


Directions:
Mix yeast and sugar into warm water and let stand for about 10 minutes until it is frothy. Add oil, molasses, salt and egg. Stir in flax and whole wheat flour. Stir in white flour 1/2 cup at a time until you have a dough that is not too sticky. Knead dough on a lightly floured surface for 8-10 minutes until it is smooth and elastic (or use a Kitchen Aid mixer to do all the mixing and kneading for you). Once you are done kneading, put the dough into a lightly oiled bowl and turn to coat it with oil. Then cover the bowl (I use a piece of wax paper and a tea towel, because one time I just used a tea towel and the dough stuck to it really bad!) and put it in a warm place to rise for 45 minutes to 1 hour until it's doubled. Punch it down and form the dough into loaves and put them in greased loaf pans and cover them and let them rise for another 45 minutes. Then preheat the oven to 350C and bake for 30 minutes or until the bread sounds hollow when you tap it. Turn it out onto a cooling rack immediately to cool.


I think that when I make it again at some point I am going to experiment with putting more whole wheat flour and less white flour in it. I really do like 100% whole wheat bread and I know it's better for you that way. I would also like to play with adding some other whole grains to it. I love multi-grain bread and I think it would be a lovely thing to try.

A trick that I read about for allowing bread to rise quickly and efficiently is to turn on your oven to about 200F for about a minute or so, just until the oven heats up a little bit. Then turn it off and put your bowl of dough in there to rise. I also recently heard someone mention they put their dough in the dishwasher shortly after it had been run and emptied out. So it was still nice and warm inside. I think you need to be careful that you don't put it in a place that is too warm, so it doesn't kill the yeast.

I took a couple of pictures as I made the bread so you could see how pretty it looked. The first two are just before I put it in the oven to bake. When I put the dough in the pans, before the second rising time, the dough didn't even touch the sides or ends of the pan. After rising it was about an inch above the pan. 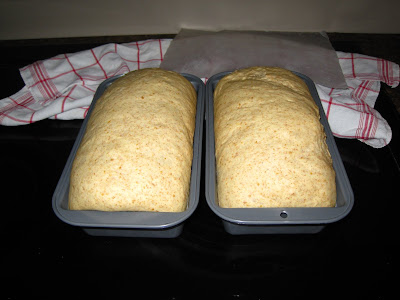 I know the next one is blurry, but I liked the way it showed the height of the dough. 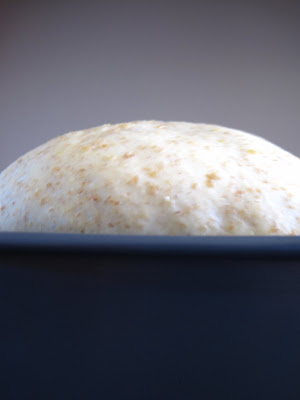 And a finished loaf, hot out of the oven! Yum! 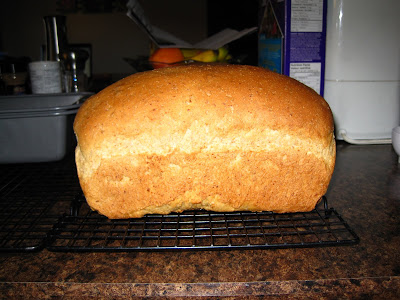 Angie
Saskatoon, Saskatchewan, Canada
I have been married to a wonderful man for 9 years. I am a registered massage therapist and an adoptive mom to a schnoodle named Kiwi. We are going to have a baby!